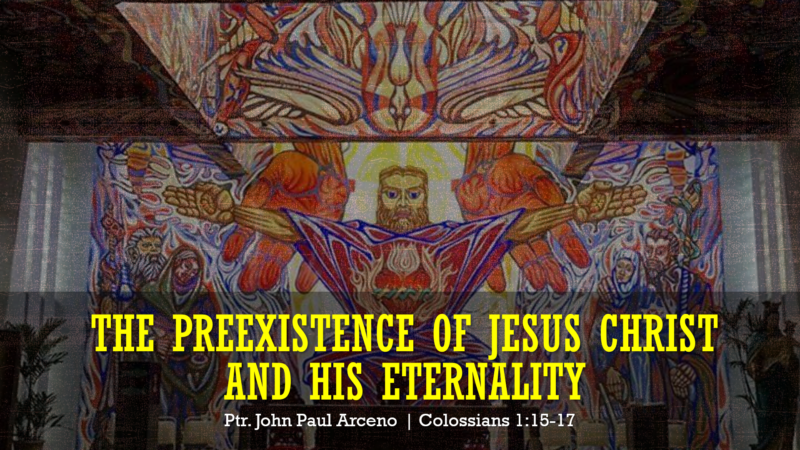 The keyword here is “prototokos” which literally translates as “born before”. Not because he is a created being; it clearly states that he was not created, but prototokos points to the thought that Jesus is eternal. He preexisted even before the creation of the world and will always be before the beginning of this universe. Gerard Friedrich says that prototokos does not mean to give birth as firstborn but as a literal chief or head. The very superior person above all things.

A primary point for today is that The Preexistence of Jesus Christ—or His eternality—is foundational to His Divinity. That our understanding of who Jesus is as God is important to how we have understood His preexistence.

Paul wrote this apologetic letter to the church at Colossae to clarify the doctrines about Christ. This church in Colossae was planted by one of Paul’s students or disciples. But why? What is happening here, remember that the place of the church is no longer in Jerusalem or Near-East, but already surrounded by Greco-Roman cities; Colossae was greatly influenced by Greek philosophy and mythology. To give some examples, they were familiar that Zeus is the One that rules over all gods and goddesses. Also, the Diaspora Jewish Philosopher named Philo—to whom we got the term Philosophy meaning lover of wisdom—was also prominent as a teacher in the said place.

Thus, Paul was telling the church that Jesus Christ is superior to the man-made god named Zeus and the teachings about Jesus Christ should not be mixed up with Philo’s compromised philosophies.

First, it displays the fullness of Christ’s divinity; meaning that Jesus is God. In Colossians 2:9, “For in Christ all the fullness of the Deity lives in bodily form.” In Hebrews 1:1-3, it states as well that Jesus is the exact imprint, the very representation of God. Meaning, if we want to know God, there is no other way for us to truly know Him apart from Christ. To know Jesus Christ is to know God the Creator.

Second, it denotes the authority of Christ. Jesus being preexistent and being the firstborn signifies his power to rule over all things. Christ here is the firstborn of all creation. He has the authority; even in Hebrews 1:3, he sits at the right hand of God which also pertains to authority as being the right hand. This power includes being in control of what is happening in the universe. The One who sustains the world.

Lastly, the third point, the preexistence of Christ proclaims His preeminence and Lordship. Christ’s kingship as the One who fulfilled the covenantal promise with David amplifies that truly Jesus is Lord.