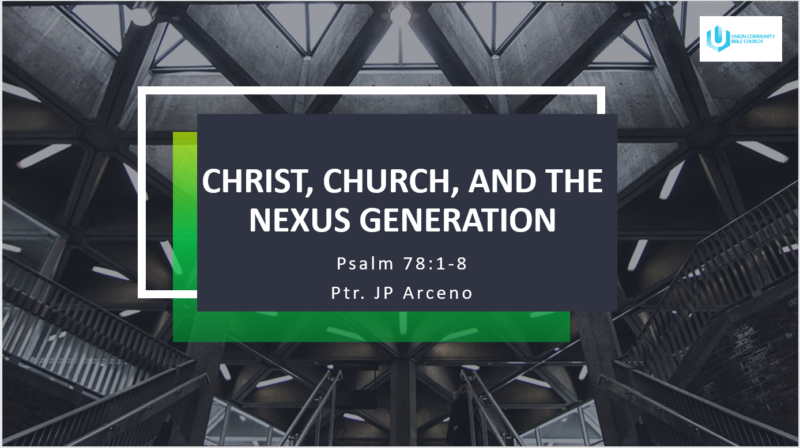 Who is the author? Asaph. He is one of the Chief musicians during the reign of King David. He is part of the worship service if we will put that in today’s context.

Two things that we can clearly take home from this passage: let me pose it from a negative point; first, not reaching out to the next generation is unbiblical. Second, not seeing the next generation as important to the community is a sin—disobedience to God’s imperative call.

Further Biblical grounds of reaching to the next generation:

The Generation of Nexus

The Visible Nexus: Church as a Hub

Titus 2:4-8, “Then they can urge the younger women to love their husbands and children, to be self-controlled and pure, to be busy at home, to be kind, and to be subject to their husbands, so that no one will malign the word of God. Similarly, encourage the young men to be self-controlled. In everything set them an example by doing what is good. In your teaching show integrity, seriousness, and soundness of speech that cannot be condemned, so that those who oppose you may be ashamed because they have nothing bad to say about us.”

Meaning, the duty to take care of the next generation is only dependent on one person. Not the youth pastor, not the pastor, not the Sunday school teacher, nor the Elders and deacons. But rather the entire community of believers.

Jesus did not only embrace the next generation. But he is the ultimate nexus of this world. It was on the cross of Christ that he offered reconciliation, redemption, and the connection of God to humanity. Our goal is not simply catering to the next generation to the church. But we need to lead them to Christ.

Nexus Generation in a word is a generation that is ought for Christ. Christ the ultimate manifestation of nexus. Connecting both humanity and God. Reconciling the relationship between God and man. It is Christ the nexus generation needs. And the church as the visible community of Christ should be the frontliners and defenders of each nexus point.