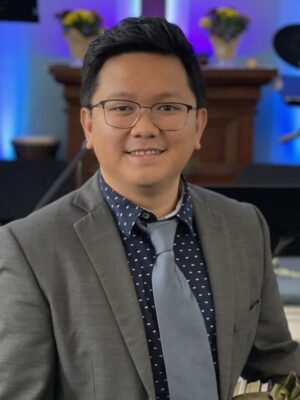 John Paul Arceno started young in pastoral ministry. In 2011, PJP started preaching when he was called to be an Associate/Youth Pastor in Pasay City. In 2016, he became the Lead Pastor of a community church in Baguio City until December 2019. Right after finishing his ThM at Southern Seminary, in January 2021, he became the Interim Pastor of UCBC and was called to become the Lead Pastor in September 2021.

He has been, and is still, part of local and global missions, church planting, and academic fields. He actively participates in the theological academe through GoNe Digital, WEA, ETS, Indigitous, etc. while passionately proclaiming the gospel of Christ weekly, pastoral care, and equipping at UCBC communities (Union and Annandale NJ).

with Elders and Deacon Head