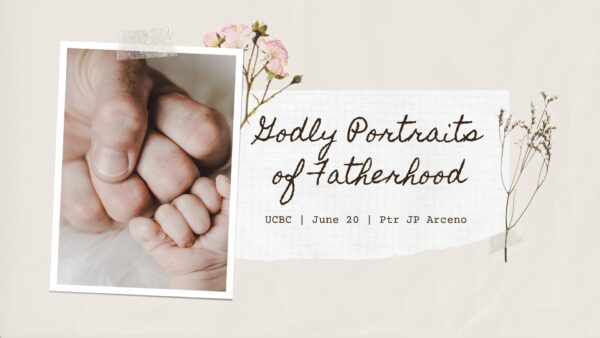 Today, we will learn how God designed the calling of fatherhood through three father stories namely Abraham, Isaac, and Jacob. Why these people? Of course, because we have been exploring the book of Genesis for a month. Other than that, the faith of Christianity in the NT is usually linked with these three patriarchs.

The next point will show how human fathers cannot fully adhere or conform to God’s design of fatherhood. Same with these three stories, they all failed, with flaws, shortcomings, and imperfect. Indeed, same with everyone, fathers need redemption from this corruption. The last point is Christological. It points to Christ as the mediator for human fathers to be able to grasp and be transformed into biblical and godly portraits of fatherhood.

We all know the story in Genesis 12 how God called Abraham to become a father of—not just a great nation—but of many nations too. Surveying Genesis 22, we will see God’s delight in how Abraham portrayed his selflessness, righteousness, and faithfulness to God.

Fathers ought to portray the same characteristics: selflessness, righteousness, and faithfulness.

Moving forward, in Isaac’s story in Genesis 28:1-4, we will see mercy, compassion, and even grace in this narrative. How? Remember that Jacob stole Esau’s birthright. Jacob lied to his father Isaac and even deceived him which was tolerated and planned by his mother Rebekah. Still, in Genesis 28 (read), Isaac blessed Jacob and even reaffirmed God’s promise to Abraham and him extending it to Jacob’s future lineage.

Fathers ought to portray the same characteristics: mercy, compassion, and grace.

Lastly, in the story of Jacob and Joseph, knowing how Joseph struggled for most of his days. He was persecuted, left behind, imprisoned, and sold. Despite the adversities, Joseph chose to forgive. But in the story where Jacob is the father, he portrayed humility in Genesis 45:8 and 46:28-30. Indeed, Fathers ought to do the same.

2. Corruption of the Design of Fatherhood.

We all know that due to sin. These fathers are imperfect. (Tell their imperfections).

Reflection: Fathers need to show their imperfection; you are not perfect. You are not a superhero. Even a superhero has a weakness. Show your vulnerability and genuineness. Be true to your character. Do not show your kids that you are perfect but rather show them that you are also in need of redemption. Children, your fathers are no perfect. They themselves are also victims and guilty of their sins.

In John 14:5-11, “5 Thomas said to him, “Lord, we don’t know where you are going, so how can we know the way?” 6 Jesus answered, “I am the way and the truth and the life. No one comes to the Father except through me. 7 If you really know me, you will know[b] my Father as well. From now on, you do know him and have seen him.” 8 Philip said, “Lord, show us the Father and that will be enough for us.” 9 Jesus answered: “Don’t you know me, Philip, even after I have been among you such a long time? Anyone who has seen me has seen the Father. How can you say, ‘Show us the Father’? 10 Don’t you believe that I am in the Father, and that the Father is in me? The words I say to you I do not speak on my own authority. Rather, it is the Father, living in me, who is doing his work. 11 Believe me when I say that I am in the Father and the Father is in me; or at least believe on the evidence of the works themselves. 12 Very truly I tell you, whoever believes in me will do the works I have been doing, and they will do even greater things than these, because I am going to the Father. 13 And I will do whatever you ask in my name, so that the Father may be glorified in the Son. 14 You may ask me for anything in my name, and I will do it.

We have explored how God can redeem human fathers from corruption, sin, and imperfection and bring them towards transformation. Being transformed into a godly portrait of fatherhood in and only through Jesus Christ. In Christ, the Father has revealed Himself. In Christ, we can understand who the Father is. In Christ, we can be with the Father. Truly, it is all about Christ. May our fathers also have a Christ-like character. Being godly is being like Christ.

Furthermore, I have included the verse in Genesis 35:28-29 in this sermon. Why? Grounding my sermon from the three patriarch’s narratives, I challenge all the fathers and even extending to all of us here to have the same goal. That when we are asked, if it will be our last day here in this world, how would you like to be remembered?

The same with Job, David, other patriarchs, Isaac’s account says that “he has died, ‘full of day/ years.’” What does it mean to die “full of days”? It means, he was content; he was fully satisfied. Stretching the narratives again, these three patriarchs: Abraham, Isaac, and Jacob, all waited for the coming Promised Seed. Last two Sundays ago, we know that it is Christ—the promised seed.

These three fathers were content and full of their days. May we all have the same goal. That when we face death, we can deem ourselves full of days and face our Master hearing, “you can now enter the kingdom my good and faithful servant.”

*This section is an excerpt only; download the full manuscript here.