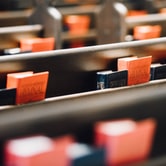 Layers of Identity: Christ In Me (Sermon Manuscript)

what does it mean to be a Christian? As I studied the culture of Israelites, later the Jewish people, and finally in the New Testament, the early church, I realized that this was also an issue for them. The issue of having layers in their identity.

This story of confusion about one’s identity as a Christian is not just true nowadays but also before. Even during the Early Church, they have been arguing about this matter. In the Epistle of Galatians, Apostle Paul wrote this letter to the churches at Galatia to remind them about their core identity in Christ (see vv. 1-2). Galatia is one of the cities that were part of his first missionary journey. Sadly, the churches at Galatia were also infiltrated by false teachers, or Judaizers whom we can call “holier than thou” Christians, and more to that later.

Three Layers of Identity according to our passage:

The churches at Galatia have distorted the gospel, or they have been drifted away from the true gospel that was preached by Paul in his recent visit. That is why he wrote this letter with some disappointment and authority to remind them about this matter. Moreover, the issue related to their Christian identity. (1:6-9)

The false gospel, or an addition to it, was influenced by the Judaizers. Who are these people? Judaizers are Christians but they enforce the Jewish laws, traditions, and practices to the Gentile Christians. These Judaizers insisted to the Galatian churches that they need to circumcise all the Gentile Christians, follow their dietary laws, and more; but they emphasize the circumcision part to become a genuine part of the covenanted or promised family. (2:4-6)

Nowadays, we still experience this issue of being influenced by false teachers:

Another layer of our identity as Christians is our title, our job, or our attainment. This evident in vv. 11-21, Paul reminded and defended his authority to proclaim the gospel and even the gospel that He preaches. On Paul’s conversion in Acts 9:1-19, this event points that Paul’s authority or license, even the message he proclaims, and his mission to the Gentiles are all from God.

With that, it shows us that, for the Judaizers, their title as Jewish Christians whom God promised the salvation plan, led them to be prideful. And we know that pride is one of the seven deadly sins. And we know that this leads to entitlement. There are subtle entitled acts; especially to the things that you are capable of doing but you do not act on it because you know that someone will do that for you, rather than you doing it for them. This entitled character leads to classes and discrimination. We are aware that it was indeed true in our passage.

The very heart of our identity is the Gospel of Christ (2:16). “Justified” means to be in the right relationship with God, made righteous person, forgiven, became part of God’s family, and being transformed by God’s grace. And if you are justified, then we ought to live like a justified person. This is the process of sanctification. There must be a continuous process of transformation in our lives, thus Paul indicated that we ought to manifest the fruits of the Holy Spirit while we mortify our sins (5:16-24).

What Christ has done becomes true to us (2:20). This is my life verse. I will only say short to this for now because I want to expose the real meaning of this passage in the last sermon for our defined series. For now, Paul all the identities he has, being an Apostle and a Jew, do not matter without the very core of his Christian identity.

Galatians 6:14-17, “14 But far be it from me to boast except in the cross of our Lord Jesus Christ, by which[b] the world has been crucified to me, and I to the world. 15 For neither circumcision counts for anything, nor uncircumcision, but a new creation. 16 And as for all who walk by this rule, peace and mercy be upon them, and upon the Israel of God. 17 From now on let no one cause me trouble, for I bear on my body the marks of Jesus.”

Do you bear the marks of Jesus?