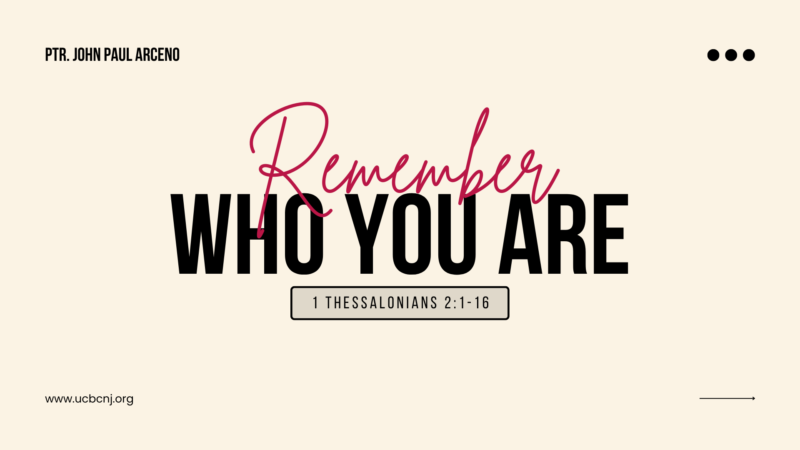 As we learned last week, it was in Thessalonica where Paul stayed when they were imprisoned and forced to escape from Philippi. However, it was only when he was already in Corinth that he wrote this letter to the local church members in Thessalonica as a thanksgiving, encouragement, and a reminder of the second coming of Christ.

Let me pause for a while. Many times, we speak about the second coming of Christ especially when the Covid pandemic happened, and now the Monkeypox. Indeed, I am eagerly waiting for His return. But if the Lord tarries his return in His will, may we not ignore proclaiming the first coming of Christ, his incarnation, the beginning of the gospel of Chris, our Good News, and hope. Both the first and second coming of Christ must have room in our hearts.

Perseverance – Paul started saying, in verse 2, that they have endured and persevered the struggle that they experienced when they were with them. Because even in Thessalonica, there were Jews who despised them for teaching another form of religion (Acts 17:5) and accusing them of proclaiming another king other than King Caesar (v. 7). Yet with all these accusations, a mob formed for a riot and dragging their brothers in Christ to the city officials, Paul together with others remembered who they were in Christ; they kept their Christlike character, endured, and showed meekness.

Perseverance is doing something with dedication despite facing challenges. Alongside perseverance is endurance. As Christians, remembering who we are is exemplifying both perseverance and endurance in our lives. Endure because Christ endured. Hebrews 12:3, “Consider him who endured such opposition from sinners, so that you will not grow weary and lose heart.” Then in verse 7, “Endure hardship as discipline.”

Every time you will encounter hardships, persecutions, or even temptations, always remind yourself that you are, first and foremost, God’s child and that you are a Christ follower. Would the people in Thessalonica be encouraged to follow Christ if they saw Paul, Silas, and Timothy showing an “unbecoming” Christlike character? Always ask yourself, “Am I reflecting Christ in this decision? Or actions?” Even in your words, the Psalmist David says, “My lips will glorify you” (Ps 63:3). If there’s nothing good to say, or if it will only cause someone to stumble, better yet to keep quiet.

In the passage, what are the unbecoming Christlike characters: impure motives, mischief or trying to trick others including manipulation and coercion, pleasing others for the sake of being liked, flattery or empty words including giving false hopes or sugar-coated sermons like the prosperity gospel, greed, putting on a mask means having a personal agenda, and having a divisive spirit. Paul, in another case, reminded the church in Rome, “I urge you, brothers and sisters, to watch out for those who cause divisions and put obstacles in your way that are contrary to the teaching you have learned. Keep away from them. For such people are not serving our Lord Christ, but their own appetites. By smooth talk and flattery, they deceive the minds of naive people.” (Romans 16:17-18) And again in Titus 3:10, “Warn a divisive person once, and then warn them a second time. After that, have nothing to do with them.”

Again, in your actions, speech, and thoughts always remember who you are. In our passage, before I end, let us check several characteristics of a true Christian.

In verses, 7 onwards: (1) Caring — like a nursing mother cares for their children. (2) Loving, (3) persevering, enduring, (4) holy and righteous (blameless), (5) encouraging and comforting like a father, (6) grateful, (7) accepting and obeying God’s word, (8) imitators of Christ, (9) sufferers with Christ and his church, and (10) redemptive or missional. The ultimate joy and hope of Paul and others are to see the members of the church living a Christlike character. Again, remember who you are.

Let me end with Paul’s description of a True Christian—those who are made alive in Christ—in Colossians 3:12-17, “Therefore, as God’s chosen people, holy and dearly loved, clothe yourselves with compassion, kindness, humility, gentleness, and patience. Bear with each other and forgive one another if any of you has a grievance against someone. Forgive as the Lord forgave you. And over these virtues put on love, which binds them all together in perfect unity.

Let the peace of Christ rule in your hearts, since as members of one body you were called to peace. And be thankful. Let the message of Christ dwell among you richly as you teach and admonish one another with all wisdom through psalms, hymns, and songs from the Spirit, singing to God with gratitude in your hearts. And whatever you do, whether in word or deed, do it all in the name of the Lord Jesus, giving thanks to God the Father through him.