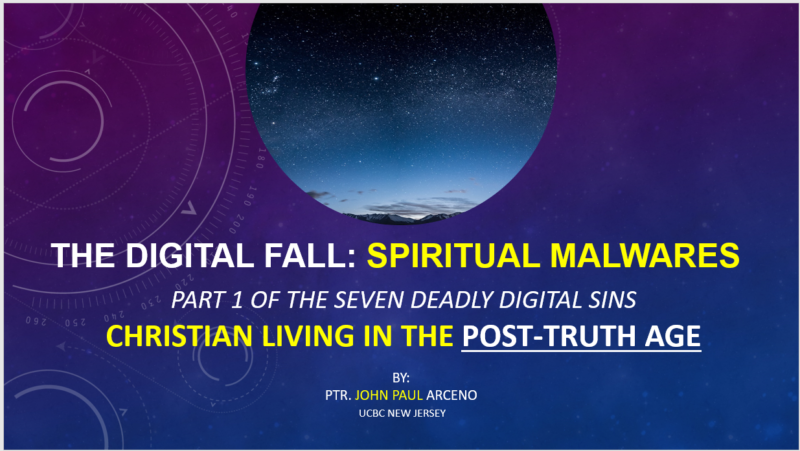 have you ever encountered that today’s generation seems to be all-knowing or knows a lot of things? Even tidbits of any kind of subject. It is because of accessibility to information and data. Unlike before, in the 1970s—to 90s, we needed to go to a public library, ask our teacher, or do serious research just to learn something that we wanted to know. Today, information is just in our hands.

The same is true for the church. Why memorize a bible verse if we can just Google it in a second? This dilemma was present even during the time of Plato, the Thamusian skepticism; he said, those who write down things will tend to become lazy memorizing important information about life.

Moreover, it also shapes who holds the authority of truth now. If you have watched the documentary in Silicon Valley entitled The Social Dilemma, then you will see that everything in social media, digital technology, and cyberspace is somehow manipulated data information (not all). Since post-truth (explain) is here and now, authority is no longer based on the person who preaches in front.

Digital technology has given us a lot of benefits in our daily living. Helland and Campbell said, “Many people using the Internet no longer distinguish between life-online and life-offline—rather, being ‘online’ has become part of their daily life and social existence. Checking emails, searching for information, and maintaining friendships and social networks are part of the everyday routine.”

However, during our discussion with the youth last Friday, they said that even though the Internet can be a good tool for communication, learning, and accessing information, it can be damaging, disruptive, and harmful. Indeed, same as the Creation narrative, even though God designed humanity to be “good” in Genesis 1 and 2, in Gen 3, the Fall of humanity came when sin entered.

Focusing on the reality of the post-truth age, let us explore more about truth and grace as stated in our passage today. In our passage, Jesus maintained and stated several times the importance of truth and knowing the truth. He said, “Truth will set you free” (Jn 8:32). Indeed, Jesus was fully aware that he will liberate everyone who puts faith in him.

Jesus’ claim in verse 36, “So if the Son sets you free, you will be free indeed.” Yet, the Pharisees and other Jewish groups during that time were not convinced about the claim of Christ as the Son of God—who bears and is the truth—that will liberate everyone from the bondage of sin.

To this rejection, we all know that the contrast of truth is “lies/ lying” or in our day known as fake news. In verses 43-45, “Why is my language not clear to you? Because you are unable to hear what I say. 44 You belong to your father, the devil, and you want to carry out your father’s desires. He was a murderer from the beginning, not holding to the truth, for there is no truth in him. When he lies, he speaks his native language, for he is a liar and the father of lies. 45 Yet because I tell the truth, you do not believe me!” No wonder, God included in the ten commandments, that His children must not lie (Exodus 20:16). Sadly, in this post-truth age, fake news, conspiracy theories, and disinformation are normal to hear and see on the news today.

Filipino Theologian Rei Crizaldo (2021) says that “social media morphed into a toxic wasteland flooded with fake news, causing its inhabitants to suffer both online fatigue and trauma, and seeing friendships built over a long period of time ripped apart in an instant.”

Instagram has all the evidence when it comes to selective posting. People tend to curate and judge each other’s lifestyle based on each posted picture (Raising 2015). Oftentimes, we take twenty photos and choose the best one to post online. The other extreme to this dilemma is to become online social climbers. We build our own ideal self that others would see who you want them to know you; not as the real you, but the ideal you.

This thought of getting away from shame and embarrassment of the real situation of one’s life creates a seed of pride that can outgrow one’s heart. It leads to corruption, misery, and guilt. At the very least, each selected post shouts that “I am having a great life!” even if it is unreal.

In a short explanation, “Cyberbullying is deliberately using digital media to communicate false, embarrassing, or hostile information about another person. It is the most common online risk for all teens and is a peer-to-peer risk” (O’Keeffe and Pearson 2011, pp. 800-804). As said, teens are the most vulnerable when it comes to this manifestation of the sin of hate, anger, and rage. Likewise, it is also the teens that are most likely the suspects.

Finally, the sinful nature of humanity manifests in how we use technology in the digital world. Online and offline life are intertwined and no one can distinguish the difference. A Yale theologian said, “Today, daily living is no longer divided into online and offline times or practices.”

However, the downside is we let the works of the evil win in this battle. This is not just a virtual battle but a spiritual battle. In John 10:10, “The thief comes only to steal and kill and destroy; I have come that they may have life, and have it to the full.” The tension between using technology for God or for the world is a battle we all need to fight. Fight with Christ—making sure that he is the center of this battle. In this post-truth age, do not take part in fake news, or any other disinformation of truth. Be for truth and grace, proclaim Jesus through your technologies.